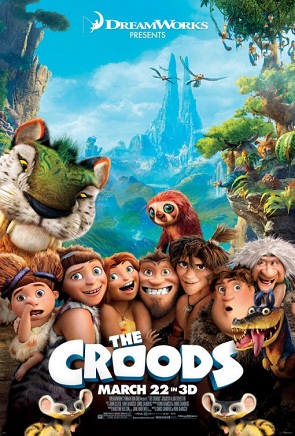 Set in a fictionalized prehistoric era, The Croods is a CG animated family film from DreamWorks Animation, about an overprotective caveman father named Grug whose one rule among his family is to never leave their cave. When his daughter Eep grows into a curious teenager, she wanders outside. Encroaching earthquakes destroy their home while the family is outside, forcing them to seek shelter elsewhere. Grug's philosophy is threatened when they must venture out into the world to find another home and brave dangerous creatures. They encounter a more evolved and intelligent male teenage caveman named Guy, who creates several useful inventions, and warns that the world is ending.

The Croods is written and directed by Chris Sanders, the director of Lilo & Stitch and How to Train Your Dragon, and Kirk DeMicco. It was released on March 22nd, 2013. It is the first DreamWorks Animation film to be distributed under 20th Century Fox due to their departure from Paramount. The first trailer can be viewed here

, and the second trailer here

A prequel series, Dawn of the Croods, premiered on Netflix during Christmas of 2015. A sequel was also in the works

, but was briefly canceled following Universal's takeover of DreamWorks Animation, before finally being set for a December 23, 2020 release date.