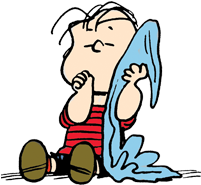 He can't be without it.
"AAAAAAAUGH! I need my blanket! I admit it! Look at all of you! Who among you doesn't have an insecurity? Who among you doesn't depend on someone, or something, to help you get through the day? Who among you can cast the first stone? How about you, Sally? You with your endless "Sweet Babboos"? Or you, Schroeder? You with your Beethoven, Beethoven, Beethoven?! And you, Lucy, never leaving Schroeder alone, obsessing over someone who doesn't care if he ever sees you again? What do you want?! Do you want to see me unhappy? Do you want to see me insecure? Do you want to see me end up like Charlie Brown?! Even your crazy dog, Charlie Brown. Suppertime, suppertime, suppertime! Nothing but suppertime 24 hours a day! ARE ANY OF YOU SECURE?!"
— Linus van Pelt pointing out that Everybody's Insecure,

As defined on The Other Wiki, "A security blanket is any familiar object whose presence provides comfort or security to its owner, such as the literal blankets often favored by small children."

When you deal with small children, it is a common sight to see them carrying something such as a blanket or stuffed toy. In fact, some children are attached to this object to the point of making it a Companion Cube. There are numerous reasons for this, but the simplest and most common is the fact that, as the definition above says, it provides comfort to the owner.

While blankets are perhaps most common, the Security Blanket can be any object. A toy, a pillow, some kind of trinket. Can also be a type of Magic Feather, giving its owner a bit of confidence where otherwise they would have none. It has also been used, from time to time, to provide cover for a Macguffin.

If the character is separated from their Security Blanket, or it is otherwise destroyed before they're ready to let go, expect the crying and Inelegant Blubbering to commence ad nauseam. Especially, in Real Life.

Can overlap with Girls Love Stuffed Animals and Sentimental Shabbiness. Compare Living Emotional Crutch and the Companion Cube. May be a #1 Dime.