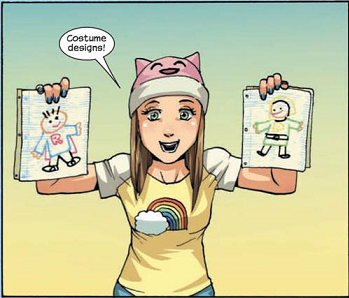 Mrs. Zales: Katelynn! Clothes on!
Katelynn Zales: [naked] I'm a turkey!
Mackenzie Zales: Godammit, Katelynn! I'm sorry, Deandra.
Deandra: Oh no, no problem. This girl actually reminds me a lot of myself when I was two.
Mackenzie: ...She's seven.
— The Most Popular Girls in School, "A Very Deandra Thanksgiving"
Advertisement:

You turn on the TV and start watching it. Apparently, some child actor is guest starring. But wait a minute. How old is his character? He says he's X, but he's acting like X minus 5. What kind of 14-year-old gets real excited over a balloon? 10-year-olds don't (usually) watch Nick Jr.! Wait, they still believe in the Tooth Fairy? To put it simply, that character is a Kiddie Kid.

Basically what happens when Most Writers Are Adults is applied, but instead of the writers writing about issues relevant to them, they try to guess what kids act like and hit below the target age. On other occasions, writers may have a kid of the appropriate age in mind, but the director winds up casting a child in the role who's much older than intended (this is especially prone to happening in adaptations). This may also happen when a show featuring teenagers is being marketed to younger kids, so they make the teenagers act like the target audience.

In most cases, the kid in question has not had a conventional upbringing (e.g. they're orphans, homeschooled), causing them to have a naïve outlook. They may also act younger than their age due to mental deficiency.

Can be a side-effect of Competence Zone. Contrast Wise Beyond Their Years and Acting Your Intellectual Age. Related to Menace Decay. When it's an adult behaving younger than their stated age, it's Manchild and/or One of the Kids.

This can be Truth in Television for some, since not everyone acts as mature as or shares the same interests as others.