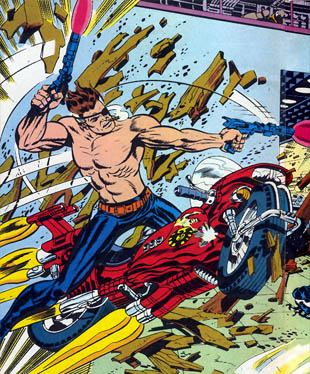 Due to Awesomeness Being a Force, the splinters and shrapnel don't touch him.
Hal 'Otacon' Emmerich: You know, I asked an active-duty Army officer once: If an infantryman had to take on a tank one-on-one, how should he do it?
Solid Snake: And what was his answer?
Hal 'Otacon' Emmerich: "Don't." He swore there's no way in hell a single infantryman could take down a tank by himself.
Solid Snake: Interesting.
Hal 'Otacon' Emmerich: I always suspected there was a little something crazy about you, Snake. But after hearing that story... Now I know it. You're nuts! Single-handedly taking out a tank? That's crazy! You're insane!
Solid Snake: Otacon, is this your idea of a compliment?
Hal 'Otacon' Emmerich: Yes! You're the toughest, craziest, most hardcore badass on the planet! You're... THE SHIT!
— Metal Gear Solid 4: Guns of the Patriots
Badass is a term associated with people who possess great prowess in physical fighting,
Advertisement:
bravery, durability, or mere coolness. The term is primarily used to describe either a type of character with these attributes or describe the kind of actions that a character performs.

However, exactly what a badass person or action is can differ wildly depending on context or the people using the term. This is shown in how it can be used as a noun or an adjective. While there is no precise definition, there is a broad consensus on actions or people who could often be called badass. A list of such properties is on the Analysis page.

This is a Fan Speak definition. Please put examples in, and link to, the pages on the Badass Tropes index.