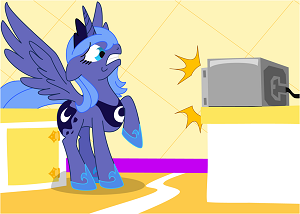 Progress is a My Little Pony: Friendship Is Magic fanfic by Andrew J. Talon, which originally started as a one-shot titled Luna vs. the Microwave. The story stars Princess Luna as she attempts to catch up on how much life has changed in Equestria.

It can be found on Equestria Daily here