This page contains several unmarked spoilers. You Have Been Warned! 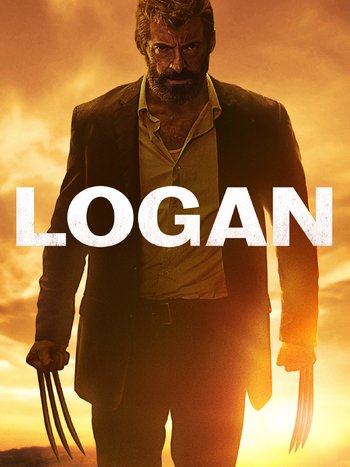 "Nature made me a freak. Man made me a weapon. And God made it last too long."
"There's no living with a killing. There's no going back from it. Right or wrong, it's a brand. A brand that sticks. There's no going back. Now you run on home to your mother and tell her... tell her everything's alright, and there aren't any more guns in the valley."
— Shane
Advertisement:

Logan is a Neo-Western Superhero film in the X-Men film series that follows the mutant superhero James "Logan" Howlett ("Wolverine") after X-Men Origins: Wolverine and The Wolverine, the latter of which shares a director in James Mangold. This film marks the final appearance of both Hugh Jackman as Wolverinenote Save for a cameo in Deadpool 2 created with archive footage from X-Men Origins: Wolverine and Patrick Stewart as Charles Xaviernote Until Doctor Strange in the Multiverse of Madness. The film also stars Dafne Keen as Laura, Richard E. Grant as Doctor Zander Rice, Boyd Holbrook as Donald Pierce, Stephen Merchant as Caliban, Eriq LaSalle, and Elise Neal. The original "Old Man Logan" story arc; Innocence Lost; and classic westerns such as The Cowboys, The Shootist, and Shane are cited as the story's primary influences.

In the year 2029, in an Alternate Timeline to the main X-Men and Wolverine movies, the majority of mutantkind is extinct. With the age of Superheroes now long gone, an aged Logan tries to live quietly on the Mexican border as he cares for a mentally ill Charles Xavier, even as his own Healing Factor decays. But when a young girl with powers identical to Logan's named Laura comes looking for the aging mutant, Logan soon lands in the middle of one last battle, this time against mutant-hunting mercenaries and a Mega-Corp that wants Laura for their own sinister purposes.

A black-and-white version of the film (Logan Noir) was given a one-night showing in select theaters on May 16, 2017, one week before the film's home video release. This version of the film was packaged alongside the original version in the film's Blu-ray release. Logan is also notable for being the first-ever film adaptation of a superhero comic book to receive an Academy Award nomination in the Best Adapted Screenplay category.

While Hugh Jackman stated that he had plans to play Wolverine for as long as he possibly could, he ultimately changed his mind upon learning about this movie's story and instead decided that it would be the perfect Swan Song for his long tenure as the superhero. (In addition, a conversation with Jerry Seinfeld, of all people, helped him make this decision.) Afterward, he was said to be involved with Fox's producers in recasting the character for future X-Men and Wolverine movies. Nothing ever came of this, however, due to Disney's acquisition of Twentieth Century Fox and their own plans to reboot the franchise — and while some remain hopeful that Jackman returns to the role, he seems content with ending his tenure as Wolverine on a high note, letting this film mark the End of an Era before eventually passing the torch to a new actor to play Wolverine in the Marvel Cinematic Universe.

A short film teasing Deadpool 2, No Good Deed, played before Logan in US and Canadian theaters. It has no actual connection to this film, though.

open/close all folders
# to B
C to F
G to J
K to N
O to R
S to Y
There's a man goin' 'round takin' names
And he decides who to free and who to blame
Everybody won't be treated all the same
There'll be a golden ladder reachin' down, when the man comes around...