This film contains unmarked spoilers for Death Note and Death Note: The Last Name. You Have Been Warned! 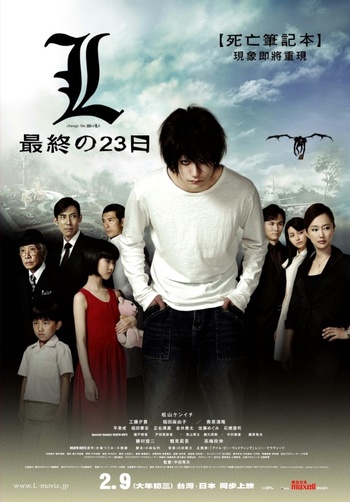 "I too have sacrificed lives. But I cannot abandon this life in front of me."
"No matter how gifted, you alone cannot change the world. But that's the wonderful thing about this world."
— L Lawliet
Advertisement:

L: Change the WorLd is a spinoff from the Death Note Series, and was released in Japan on February 9th, 2008.

The legendary detective L, having written his own name in the Death Note as part of his plan to expose Kira, now has 23 days left to live. Approaching death's door, he uses his remaining time to solve crimes all over the world. When a young girl and boy come to him for aid, L is soon faced with what may be his most difficult case yet: stopping a group of corrupted scientists from spreading a lethal virus throughout the earth.

"Watari, I want to live a little longer in this world."