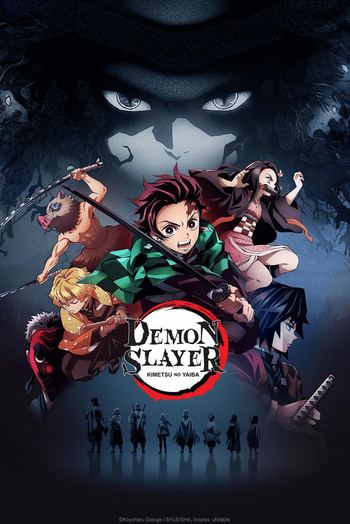 The hunt is on.
“No matter how many people you may lose, you have no choice but to go on living—no matter how devastating the blows may be.”
— Tanjiro Kamado
Advertisement:

Demon Slayer: Kimetsu no Yaibanote Demon Destroyer/Devastation Blade is a manga series by Koyoharu Gotōge. It was serialized in Weekly Shonen Jump from February 15th, 2016 to May 18th, 2020, with 205 chapters in 23 volumes.

Taking place during the Taisho Era

, the series tells the story of Tanjiro Kamado, who lives with his mother and five siblings in a small hut in the mountains. One day, he goes to sell charcoal in the nearby village. On his way back, a villager warns him of rumored demon-sightings and offers to shelter him for the night, so he can make his way back safely during the day. When Tanjiro returns, he finds his entire family slaughtered, and his younger sister Nezuko turned into a demon. A demon slayer named Giyu Tomioka arrives and is about to finish her off, but to his surprise, Nezuko retains enough of her humanity to protect Tanjiro. Seeing this oddity and Tanjiro's promising fighting skills, Giyu decides to send them to his old mentor for training.

So begins Tanjiro's life as a demon slayer, on a quest to cure his sister and find the one who murdered their family.

An anime adaptation, produced by ufotable began airing April 6th, 2019 and can be viewed on Crunchyroll here

A movie adaptation of the Mugen Train arc, which continues from where season 1 left off, Kimetsu no Yaiba: The Movie - Mugen Train

note Kimetsu no Yaiba: Mugen Ressha Hen was released on October 16th, 2020 in Japan, and in US theaters on April 23, 2021. It went on to become the highest-grossing anime and Japanese film ever, records held by Spirited Away for two decades.

During a special official Aniplex/ufotable stream on February, 14th, 2021 the much anticipated second season was announced, following from where the movie left off, continuing it with the Red-Light District arc.

On September 25th, 2021, Aniplex announced that the Mugen Train movie would be reworked into a TV edition, composed of 7 episodes, but not as a mere direct splicing of the movie into short episodes, new scenes were added to complete the arc, coupled with a new OP and ED theme, and the first episode was completely new; the new cut started to air on October 10th, 2021 in Japan. The Red-Light District arc premiered on December 5th, 2021, running for 11 episodes, concluding in February 13th, 2022.

On February 13th, 2022 Aniplex and ufotable formally announced the animated adaptation for the Swordsmith Village arc is in production.

Compare with Kaiten Mutenmaru, also a manga about a katana-wielding boy against horrific but sometimes sympathetic monsters created from humans.

Related works within the series include: