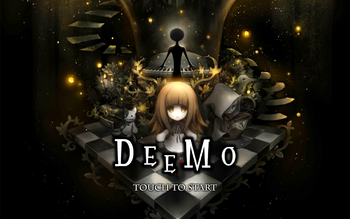 is a Rhythm Game developed for Android and iOS devices by Rayark, the same developer behind the rhythm games Cytus and VOEZ. Essentially, Deemo is a column-free touchscreen version of beatmania, with an emphasis on piano notes. Currently, there are more than sixty songs available to play in three difficulties for each song, distributed over twelve collections.
Advertisement:

The titular character is a speechless black figure who lives inside a tower, passing his time by playing his piano, which is situated on an enormous tree stump. One day, an amnesiac little girl falls from a window in the ceiling just above Deemo's piano. Intent on helping her return to where she came from, Deemo makes the tree stump grow into a tree again through his piano playing, hopefully tall enough to reach the high window.

On Android, a part of the story and songs are available for free (with included timer and ads for some songs), and several song packs require in-app purchases. On iOS, once you've purchased the game songs required by the storyline are free, but other song packs are only available as in-app purchases. The game was also released for the PS Vita, as a slightly different version titled Deemo: The Last Recital and has several exclusive songs, along with the cutscenes now being animated, and an epilogue story being added into the game.

port was released on September 21, 2017 in Japan, and September 28, 2017 in North America. This port later received an update to support the Toy-Con Piano from the Nintendo Labo Variety Kit.

A 3D remake with added exploration and puzzle elements, Deemo -Reborn-, was released for the PlayStation 4 in November, 2019, Windows PC (via Steam) in September, 2020, and Nintendo Switch, iOS and Android devices on December, 2020. This version is VR compatible on the former two systems, adding a point-and-click feel to the exploration. View the trailer here

A sequel, Deemo II, was released on January 13, 2022. You can watch the teaser trailer here.