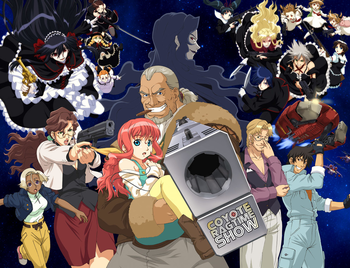 A group of rough-and-tumble space outlaws. A criminal organization with a team of android assassins. A hard-as-nails female detective and her airhead sidekick. And a planet packed with treasure scheduled for demolition.

Shove them together, and you've got Coyote Ragtime Show.

The twelve-episode series basically follows the misadventures of Mister, the leader of a branch of outlaws referred to as 'Coyotes', and his adopted daughter-thing Franca, who holds the keys to a massive treasure that's the legacy of her father, a legendary Coyote. However, they are not only being pursued by a sexy, gothic woman named Marciano, but her band of '12 SISTERs', a band of robots dressed head to toe in Goth-Loli. Really.

The first two episodes can currently be watched for free on the FUNimation video portal, here