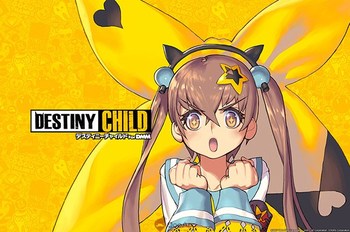 Destiny Child is a Korean mobile RPG developed by STAIRS Corp. An English version was released on November 28, 2018 and can be downloaded from the iOS and Android app stores.

You play as a young devil who after being fed up with the demon world chooses to live in the human world, working a day-to-day job as a store clerk. After failing to read the Terms and Services of a mysterious email, a mysterious succubus named Mona appears, declaring you a contestant in the Archfiend Contest to be the new King of Devils.

Not to be confused with Destiny's Child.