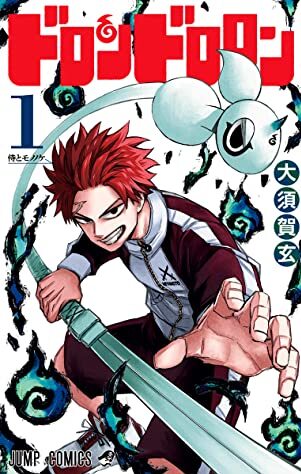 To make the world a nice, happy place
Around 50 years ago, strange monsters called mononoke began appearing and attacking humans. In the past year, they have killed a total of 4,049 people nationwide. In large cities, one attack occurs every three days on average.
Advertisement:

Doron Dororon (ドロンドロロン) is a Urban Fantasy Shounen manga written and illustrated by Gen Ōsuka (who previously worked on Golem Hearts), based on a one-shot published in Jump GIGA in 2021, and serialized in Weekly Shonen Jump from November 2021 to August 2022.

Dora Sasaki promised his late mother that he'd become a samurai, and protect people from monsters called mononoke. However, while he has incredible physical strength, he has zero supernatural energy, which is essential for fighting mononoke. Then he meets Kusanagi, a friendly mononoke who only wants peace, and has the ability to morph into pretty much anything. After teaming up to save some children from a dangerous mononoke, Dora and Kusanagi decide to form a partnership, hoping to create a happy and kind world.