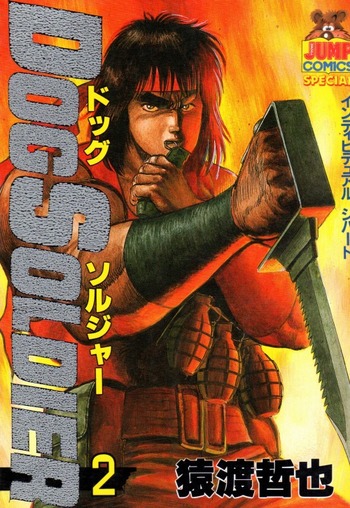 Dog Soldier is a Seinen manga, from 1987-1992, by Tetsuya Saruwatari, who would later illustrate Riki-Oh and after that create High School Exciting Story: Tough. The main character is John Kyosuke Hiba, a former Green Beret living in poverty who, after become disillusioned with his Sociopathic Soldier commanding officer in The Vietnam War and quit the army, is hired/blackmailed by the Japanese government to do dangerous jobs. There were 12 volumes, with the first 3 having been scanlated. There is also an extremely obscure 1989 OVA titled Dog Soldier: Shadows of the Past

. This manga is basically the American action movies of the The '80s in manga form. And yes, that is exactly as cool as it sounds.