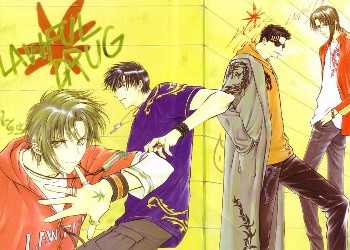 Drug & Drop is a manga written and drawn by CLAMP. Originally titled Legal Drug when it began serialization in Monthly Asuka in 2000, it went into hiatus in 2003, and came back in 2011 under the title Drug & Drop in the seinen magazine Young Ace. And it went into a hiatus again in 2013.

The story follows Kazahaya Kudo, a young man who collapses in the snow after running away from home and thinks that he doesn't want to die. He is found by Rikuo Himura, who takes him to the Green Drugstore, where he gets a job from Kakei, the eccentric owner. Since both guys have supernatural powers, they take on "special" cases on the side that never go as smoothly as they'd hoped. There's also the beginnings of a Myth Arc in play, with Kazahaya hiding from his twin sister, Kei, Rikuo searching for a mysterious woman named Tsukiko, and Kakei and his lover, Saiga, preparing for something that's looming over the horizon. And it all comes with the boatloads of subtext and Ho Yay that you'd expect from most of CLAMP's work.

Not to be confused with the use of legal drugs in a work; that's a G-Rated Drug.