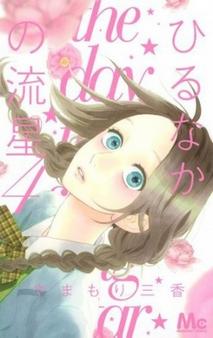 You're my daytime shooting star.
Advertisement:

Suzume Yosano is an ordinary 15-year-old girl who just started high school. She's always lived peacefully in her small village on the countryside, skipping classes to look for the shooting star she once saw while it was still daytime and that helped her get home after being lost as a kid. However, after the sudden transfer of her father to Bangladesh and the decision of her mother to go with him, Suzume has to move to Tokyo to live with her uncle. In her new life, she'll have to deal with friends, exams and newfound feelings...

A series about love, friendship and getting over past relationships, Hirunaka no Ryusei (lit. Daytime Shooting Star) is a shoujo manga by Mika Yamamori. It was serialized in Margaret from May 2011 to November 2014 at 78 chapters (not counting extras) and 12 volumes, although a extra volume containing unpublished extras and one-shots was later released. It was released in English by VIZ Media under the Shojo Beat imprint. The manga also has been licensed in Italy, France, Spain and Germany. A Live-Action Adaptation was released on March 24, 2017.