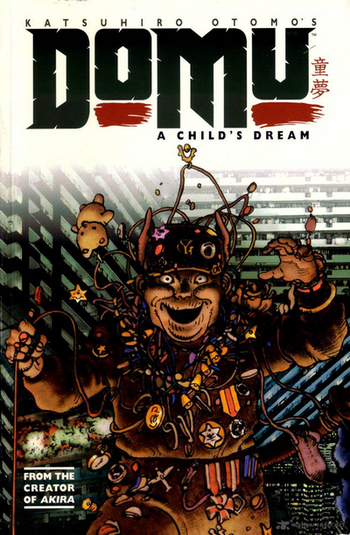 Domu: A Child's Dream is a 1980 manga written by Katsuhiro Otomo, who would later be known for AKIRA.
Advertisement:

In late-'70s Japan, there have been a staggering 31 suicides by residents of the same apartament complex over the previous two-plus years. The tally is brought to 32 with the death of a supermarket manager. Once again, inspectors Yamagawa and Tamura have to investigate another frustrating case. Once Yamagawa also commits suicide, it's up to Tamura to solve exactly what is going on.

Meanwhile, little Etsuko moves into the apartment complex. Her own psychic powers match those of Old Cho, the man who is behind all of the deaths. The story continues with one final battle.

This story won the 1983 Japan Science Fiction Grand Prix after being re-released into graphic novel form. Supposedly, Guillermo del Toro has the rights to make a film adaptation, but interest in the project has not surfaced since the late 1990s.

Tropes related to the manga: