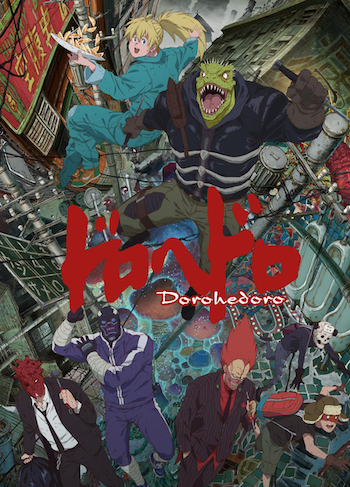 "What did the guy inside say to you?"
Dorohedoro is a Seinen series created by Hayashida Q. First premiering in 2000 in Monthly Ikki (a magazine specializing in underground or alternative manga), it ended in 2018 after almost 18 years being serialized, with 23 volumes. However, it changed magazines a few times during its run; it ran in Monthly Ikki from 2000 to 2014 before moving to Hibana in 2015 after Ikki ceased publication, and then to Monthly Shonen Sunday in 2017 after Hibana also ceased publication. Described by the creator as being like "a song with really dark lyrics, but a melody that's so happy that you want to dance to it," it manages a delicate balance of gratuitous amounts of gore, a fondness for displaying the random boobie or two, and a stark-black sense of humour.
Advertisement:

In the gloomy, dank and dystopian underworld so dismal it's known only as "the Hole," sorcerers from a different world, the so-called "Magic Users", have been plucking people off the streets to use as guinea pigs for atrocious "experiments" in the black arts. The series follows the story of Kaiman, an unlucky fellow who had such an encounter with a Magic User, that left him with his head transformed into that of a reptile's and unable to remember who he was before the transformation. Since then, Kaiman has been travelling around the Hole, accompanied by Nikaido, his female companion, in hunt of any Magic Users he can come across, hoping to find whoever cursed him and that in doing so he will be able to reclaim the lost memories of his past.

As alluded to by the quote from Hayashida Q above, Dorohedoro is a series best described as "a bunch of nice, friendly characters making the most out of living in a place that is simultaneously a Crapsack World and a World of Badass". Despite the grim setting and copious amounts of gore and Squick, the series has a very offbeat sense of charm and places heavy emphasis on both The Power of Friendship and The Power of Love. The series is also well known for its quirky sense of humor. The juxtaposition between the grim setting and the comedic elements of the story creates a very strange but engrossing atmosphere as the world of Hole and the intricacies of its society are revealed to the viewer. The result is a setting of borderline psychopaths living in absolute squalor that nonetheless maintains a positive, if not downright cheerful atmosphere for most of its run time, and it makes for an unconventional yet fun experience.

in the making, approved by Hayashida Q.

by MAPPA, which began airing in January 2020 in Japan, with Netflix streaming the series worldwide at a later time.

A character sheet is under construction. Feel free to support your contribution.

All of this is still... in the most chaotic shambles.
That is... DOROHEDORO.