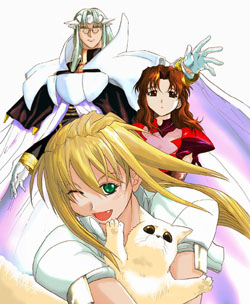 This image does not even come close to capturing the insanity.
This world... is corrupt!
—Lord Il Palazzo, opening line
Advertisement:

Excel Saga is a 27 volume manga written by Koshi Rikdo that ran from 1996 to 2011 in Young King Ours magazine as a way to mock the recession Japan was going through. The manga's title character, Excel, was based on a character from one of Rikdo's earlier works, Municipal Force Daitenzin, which was definitely not for kids. He was interested in expanding on the character and created Excel Saga as a spinoff of sorts. The Daitenzin themselves mostly carry over from that doujin as well, opposing Excel.

Excel Saga tells the story of the group ACROSS and their attempts to take over Fukuoka City as a first step to Take Over the World. ACROSS's only minions, Excel and Hyatt, try to pay for food and rent while fulfilling the goals of their glorious leader Il Palazzo. Both girls are fiercely loyal to Il Palazzo, especially Excel, who is head-over-heels in love with him. Unfortunately for Il Palazzo, while Excel is a near-indestructible force of nature, with innumerable skills, especially in adaptation and survival, she is also extremely hyperactive and incompetent. Hyatt meanwhile tends to die and revive at the drop of a hat.

Opposing them are the Department of City Security, made up of Misaki Matsuya, Toru Watanabe, Daimaru Sumiyoshi, and Norikuni Iwata, and led by Doctor Kabapu. Watanabe and Matsuya joined the department in the hopes of getting decent government jobs, not expecting that they would have to fight supervillains; Iwata and Sumiyoshi joined because they are Watanabe's friends. Ironically, both teams start out living in the same apartment complex, but only know each other as neighbours and not as enemies.

Early chapters would focus on a new temp job Excel and Hyatt had been hired for, and the ways they would try to fulfill a mission and not get fired. Or the story would be about a mission the Department was on, and how they would fail (or narrowly avoid killing themselves or each other with highly dangerous experimental weapons). Hints about the backstory of Il Palazzo and Kabapu were dropped early on, but were not the focus.

The story started getting more complex around volume seven. New characters were introduced, like Elgala, the third member of ACROSS, and roboticist Gojyou Shiouji and his family, which is teeming with unfortunate implications about his childhood. Il Palazzo created ILL Electronics, a front for ACROSS, and Dr. Kabapu and the Department of City Security tried to stop them. Excel got a lot more focus as her life became more difficult, and Ropponmatsu I, or "First", got more screentime, thanks to the device which allows her to move around and act independently and impersonate Excel. Misaki started working with Shiouji in the interest of figuring out what exactly is going on, what Kabapu is really after, what his real connection to Il Palazzo was, and why everything is tied to Excel.

Excel Saga has never had a large fanbase outside of Japan. Thanks to the sheer number of jokes and references it makes (and for fear of copyright takedowns since it is licensed), no one has ever wanted to do a serious fan translation. The official translation by Viz, which has an entire section in each book dedicated to the many untranslatable references and jokes they had to change, slowed down in 2008 to one volume (sometimes two) a year, and quietly completed its run in January 2014.

The manga was adapted into a twenty-six episode Anime in 1999 directed by Nabeshin. Since the anime's storyline was only loosely based on the first five volumes of the manganote  The two diverge shortly after Ropponmatsu II (Nishiki) is introduced., it changed so many things it needed its own page, and tropes that only happened in the anime should go there. Because the anime diverged from the manga so early, many of the characters introduced later — most notably Elgala and Shiouji's family — do not appear in the anime at all.