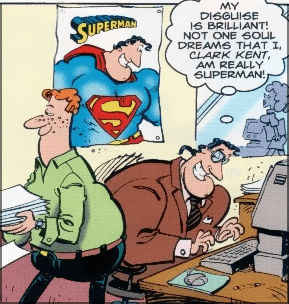 Clark Kenting is the process by which a Secret Identity and/or cover story is maintained over a long period of time by asking the audience to go along with a Paper-Thin Disguise. This is also asked of the other characters in the story, with no excuses, basically asking everyone to “just go with it.” For the most part, it’s a way to make it clear to the audience that the two identities are the same person, but people in-story can’t tell them apart.

The trope is named after Clark Kent, Superman's alter ego, who basically looks like Superman in a suit and glasses. However, Superman can actually pull it off to great effect, leading to the idea that sometimes the best way to maintain a Secret Identity is to hide it in plain sight. After all, if you're not wearing a mask, you have nothing to hide, right? Still, the trope generally makes a lot more sense if both identities don't hang out with the same people, or even have a Loves My Alter Ego scenario going on with them (like, you know, Superman). Seeing someone flying in the sky and later seeing someone with technically the same face in a crowded street is a bit different from routinely looking someone in the eyes with and without glasses.

Pedro and Nico don't seem to realize the very talented cockatoo with the leaf over his face is Nigel, the antagonist from the first film. Rafael is at the very least suspicious.

Pedro and Nico don't seem to realize the very talented cockatoo with the leaf over his face is Nigel, the antagonist from the first film. Rafael is at the very least suspicious.