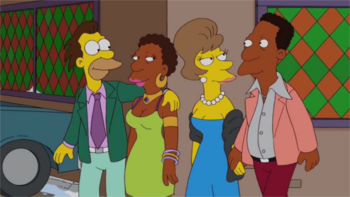 "Come on, George, relax! Just because they look alike, that doesn't mean you're secretly in love with Jerry."
— Cosmo Kramer, Seinfeld, "The Cartoon"
Advertisement:

A character's new Love Interest is eerily similar (in personality, looks, etc.) to an established character—often a best friend of the incompatible sex, or even the character himself. The similarity is sometimes pointed out when someone is listing characteristics of the love interest, and realizes it sounds a lot like a description of someone else they know.

If the character is dating an opposite-gender doppelganger of a friend, it's more often Played for Laughs and mild Ho Yay than to suggest any serious sexual tension between the two friends. It might even be a positive omen for the relationship: the character gets along well with their friend, so the romance may be similarly successful. If the doppelganger and the friend are the same gender, though, it's likely to spark jealousy or suggest that it's the friend they're really interested in.

A common variant is someone dating their own opposite-gender doppelganger, which usually results in the characters becoming repulsed.

This trope does not include instances where the doppelganger is actually a clone or alternate universe double, or other situations where it is the same person or an actual duplicate: this is when someone similar comes along by mundane coincidence.