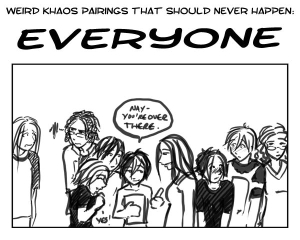 is a Slice of Life Web Comic about eight English teenagers (at most one completely straight) coming of age. They are:
Advertisement:

Each Arc tells the story from the current narrator's viewpoint. As of Wednesday, January 2nd of 2013, the full story has come to an end. The author, Tab, has started a new comic called Shades of A.