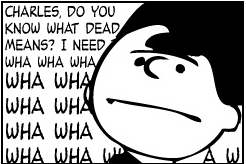 Apparently, Charlie Brown had a Flat-top before undergoing chemotherapy
Kick the Football, Chuck.

is a Black Comedy webcomic by Rev. Michael Fitzgerald (creator of Mr Square and Existential Terror and Breakfast

) intended to be a Deconstruction of Peanuts. In it, Charlie Brown goes bald because of chemotherapy and every common gag in Peanuts is shed in this light.