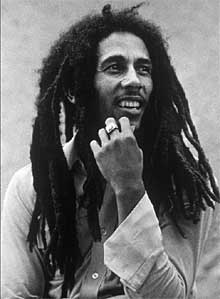 Bob was always easily recognizable by his hair.
Advertisement:

This is when a character wears their hair in a dreadlocks style, thus visually standing out from other characters, as a sign of rebellion, independence, devotion to religion, or just being free-spirited.

In fiction (and for the specific purpose of this trope), dreadlocks are worn most frequently (but not exclusively) by black characters, though said characters may not necessarily be Rastafarians by faith, or even be religious at all. Said characters tend to be laid-back, anti-authoritarian (to varying degrees, depending on the work in question), users of..."interesting" substances (as per the stereotype that dreadlocks-wearers almost always smoke cannabis/weed/ganja/hashish/marijuana note yes, those are all the same thing), or some combination of the three.

About dreadlocks: the style involves letting the hair on one's head grow for a long time without cutting it, then twining the hair into several long matted strands. The strands may be very thick or moderately thin, and may vary in length from shoulder-length to going all the way down the back in some cases. When worn by a male, the locks may sometimes give him the appearance of a lion, especially if accompanied by an unshaved beard. (As a side note, some Rastafarians wear their locks in a turban; this trope focuses primarily on those who wear their locks loosely.) Putting one's hair into a series of small braids is not dreadlocks, although it's sometimes used to evoke the style without actually having to get the hair matted.

In Real Life, dreadlocks are most commonly associated with practitioners of the Rastafarian religious movement and, to a lesser degree, with Jamaicans, reggae musicians, and hippies. Bob Marley is quite possibly the most famous dreadlocks wearer, as he was a devout Rastafarian.

The reasons for wearing of dreadlocks may vary across different groups, ranging from "deep religious and spiritual conviction" (as in the case of Rastafarians and some Hindus) to "symbolism of rebellion against authority, especially that of the government-controlled type" (as exemplified in Bob Marley's music, and explained above).

Please note that for a character(s) to specifically qualify for this trope, just wearing dreadlocks is not enough: see the text above, and contrast the Dreadlock Warrior, who wears the same hairstyle for very different reasons.

The trope name comes from a line in Bob Marley's 1983 song "Buffalo Soldier", which was released posthumously on the album Confrontation.

This Jamaican truck has the Tormentor in his signature dreadlock! Who be jammin' now, mon?

This Jamaican truck has the Tormentor in his signature dreadlock! Who be jammin' now, mon?