This page covers the 1990s anime. For the entire franchise, see Franchise.Sailor Moon and for the manga see Manga.Sailor Moon. 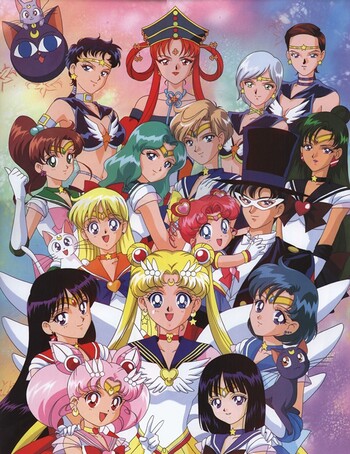 The life of ditzy school girl Usagi Tsukino takes a turn for the unexpected when she discovers that she is the Reincarnation of an ancient lunar warrior from the Moon Kingdom. With the aid of a feline mentor called Luna, Usagi must take up the mission of defending the Earth from the various evils that threaten it while searching for the reincarnation of the Moon Kingdom's princess.

Over the course of a year, Usagi grows into her role as the Magical Girl Sailor Moon and greatly matures as a result, gathering a team of four other reincarnated warriors and realizing her true potential as both a fighter and a growing young woman. The series itself mostly follows a Monster of the Week format, with subsequent series introducing progressively more powerful villains and matching power-ups, and greatly expanding the mythos behind Usagi's past life in the Moon Kingdom and her fated future in the utopian Crystal Tokyo. The series is generally broken down into the following story arcs (not counting filler): Dark Kingdom, Black Moon, Infinity (Death Busters), Dream (Dead Moon Circus), and Stars (Shadow Galactica). Both the anime and manga end on a high note as Usagi brings peace to Earth and the galaxy.

The anime was bought by DiC in 1995 for an English dub, which did poorly in syndication in North America but later found renewed popularity through reruns on cable TV, which led to additional episodes (through the end of the fourth season) being dubbed and broadcast through Cloverway, Toei's US branch, in 2000. By May 2014, Viz Media announced the release of a completely remastered, re-dubbed, uncut version of the entire 200-episode original television series.

The enduring popularity of the anime eventually led to Sailor Moon Crystal, a more faithful manga adaptation, in 2014, with Kotono Mitsuishi once again reprising her role as Usagi/Sailor Moon. Sailor Moon received several Video Game Adaptation games between 1993 and 2004, including a fan project by Destiny Revival based on Final Fight and Double Dragon variants of Beat 'em Up games. The anime series also spawned five TV specials and three theatrical films. The films are non-serial movies.

The anime adaptation of Sailor Moon provides examples of:

"I'm Usagi Tsukino. I'm 16 years old, and go to Juban High School. I'm a bit of a klutz and get teased for being a crybaby. But the truth is, I'm the Pretty Guardian who fights for love and for justice. I am Sailor Moon."

Force Our Way In

Force Our Way In