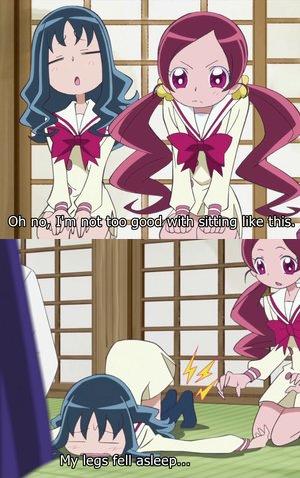 In Japan, the seiza

(literally "correct sitting") position is a very formal kind of kneeling, sitting on your heels with big toes crossed. The position features heavily in tea ceremony, meditation, martial arts, and other formal rituals. This is not an easy position to get used to, and can become uncomfortable very quickly.

In anime, a character's tolerance of seiza immediately separates those who possess charm and grace from those who merely want to show that they do. Any character who lacks sufficient natural dignity must then undergo a heroic battle not to squirm, fidget, or otherwise show any sign of the agony that he or she is in. Alternatively, the discomfort could be for… other reasons…

This is sometimes used as (another) method to out the wannabe-ojou, while casting a quietly respectful light on another character.

Note that in some martial arts such as iaijutsu, practitioners use a sort of half-seiza called tatehiza. While the left leg is in the full seiza position, the right leg is planted on the ground so the practitioner is on one knee. It allows for a quicker transition to standing.