Manga / Shrine of the Morning Mist 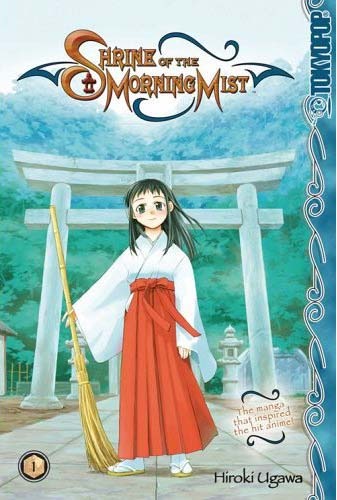 Yuzu Hieda is an ordinary high school freshman who also happens to be a shrine maiden. Her childhood friend and cousin, Tadahiro Amatsu, is coming to live with her and her family. As Yuzu has had a long-standing crush on the boy she is more than happy to see him again. Unfortunately he has recently become the target of Ayatachi, a mysterious masked sorcerer who wants him for some nefarious purpose. Tadahiro has the power to see the spirit world through his left eye (which is colored differently from his right eye), but there isn't much he can do to defend himself from the demons Ayatachi throws at him. Fortunately, Yuzu is more than skilled when it comes to dispatching the nightmarish denizens of the spirit world (and what she can't destroy with her ceremonial dagger, she will usually accidentally run over with her bicycle).

When the demons become too much even for her to handle, Yuzu starts up the "Miko Council" at her local school, recruiting various members of her high school class and training them to become demon hunters. They take to it surprisingly well and much character-driven hijinks ensue...

Of course, the forces of evil aren't going to sit back and do nothing while all this is going on. They send their own agents to the school, disguised as transfer students. Will they succeed in their plan to summon a dark god and plunge Japan into "nothingness?" Will Tadahiro ever remember the childhood promise he made to Yuzu as they held hands at the Shrine of the Morning Mist? (And will Yuzu ever make it to school on time and without running anybody over?) You'll have to watch to find out...

Shrine of the Morning Mist (Asagiri no Miko) is a Japanese manga written and illustrated by Hiroki Ugawa. The manga was serialized in Shōnen Gahōsha's Young King Ours from 2000 to 2013. The manga is licensed in North America by Tokyopop and in Australia and New Zealand by Madman Entertainment. The manga was adapted into an anime series, directed by Yuji Moriyama. The anime was licensed in North America by Media Blasters.