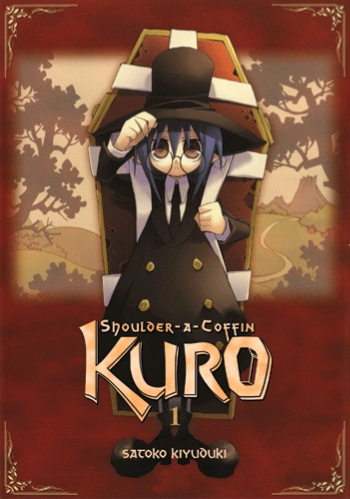 A manga series by mangaka and character designer Satoko Kiyuduki (of Dept. Heaven fame). Shoulder-a-Coffin Kuro, titled Katsugi Hitsugi no Kuro in Japanese, tells the story of a boyish young woman named Kuro who travels the land in search of... something, accompanied by a flock of bats and eventually a pair of unusual young girls named Nijuku and Sanju. She always dresses in black and carries a coffin (that, suspiciously, seems just her size) on her back—and is often mistaken for a boy. Or a vampire. Or a mortician, or a coffin salesman... the list goes on and on.

The story is told mostly in 4koma, and has an episodic feel to it—though there are occasional stories about the side characters that Kuro meets and then leaves along her way. Although the readers know next to nothing about the characters when they are first introduced, eventually the reason why Kuro is traveling and what she's looking for become clear, and Nijuku and Sanju's special abilities and purpose are explored.

This series is often noted for its similarities to Kino's Journey, though Kuro has less navel-gazing overall and tends to have a whimsical, charming feel even when serious events come up—though Kuro can get very dark every now and then.

The manga began serialization in Manga Time Kirara in 2004; it later went on hiatus from 2009 to 2012, and concluded in June 2018. It was localized for North America by Yen Press, with the story concluding in the seventh volume released in May 2019, followed by a "side story" volume of previously unpublished stories, titled Shoulder-a-Coffin Kuro Side Story: Nostalgic Travelogue released in April 2020.