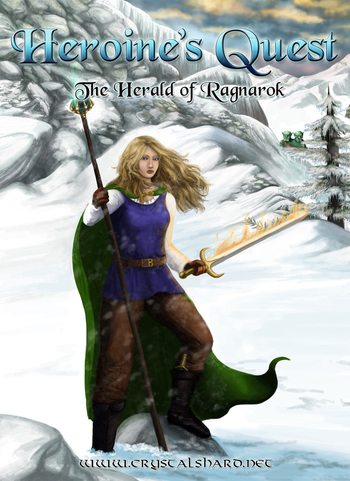 "Would you still like to know? And what?"
— The Poetic Edda
Advertisement:

Heroine's Quest: The Herald of Ragnarok is a freeware adventure/RPG hybrid by Crystal Shard. It's available for free on Steam

Set in the world of Norse Mythology, the game pits the eponymous heroine against Egther, last of the frost giants, who wishes to fulfill the prophecy of Ragnarok by covering the world in eternal ice. The game is retro-styled, offering gameplay similar to classic Sierra games, in particular Quest for Glory.

One of the death scenes where the character dies in the pillory via frostbites.

One of the death scenes where the character dies in the pillory via frostbites.