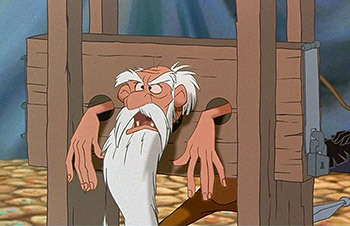 Dang it.
"Whoever shall be condemned to perpetual hard labour; to hard labour for time; or to solitary imprisonment; shall, before he undergo his punishment, be set in the pillory in the market-place, and shall remain there exposed to the view of the people for one hour; above his head shall be placed a label, containing, in large and legible characters, his name, profession, dwelling-place, his punishment, and the cause of his condemnation."
— 1810 French Penal Code, Article 23
Advertisement:

A device in which a character has their legs (or arms) restrained and has foodstuffs, preferably rotten fruit or veggies, cream pies, wet sponges or something else in that line of thought thrown at them by members of the public. Alternatively, stocks can also be used for Tickle Torture.

Technically, "stocks" only restrain the legs; the more commonly-seen restraint that holds one's arms and head is called a "pillory". However, the latter is often referred to as "stocks" regardless of this distinction.

A point seldom touched on in fiction is that being pilloried could be seriously dangerous. People were allowed to throw things at your head, and you could neither dodge nor block them. If you were lucky they would only throw fruit and vegetables (even some of those can be dangerous; you try getting hit in the face with a turnip and see how harmless that would be). If you were unlucky (or unpopular), they'd throw stones at you instead. Or materials obtained from stable floors. And if you were really, really unlucky, it would be as bad as if you'd dropped the soap in a prison shower.

Often used in Come to Gawk.

Not to be confused with standard forms of punishment.

Futura In The Pillory

Filmation's Ghostbusters has a scene with a pillory.

Futura In The Pillory

Filmation's Ghostbusters has a scene with a pillory.