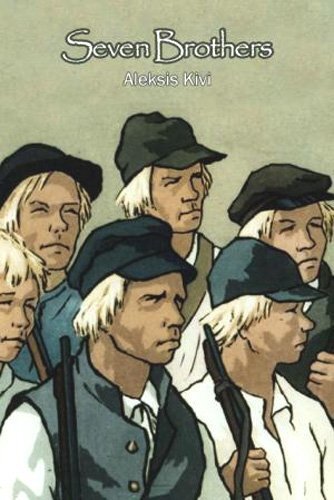 "Just so! It is good to be here! Thanks, Lauri, for the way you found for us to escape from the markets of the world. Here is freedom and peace. I ask once more: what would we care if golden flames were to burn down the whole of this world, if only the northern end of Jukola's lands and its seven sons were saved."
— Juhani
Advertisement:

Seven Brothers (Finnish: Seitsemän veljestä) is a 1870 novel by Aleksis Kivi, a story about the seven brothers of Jukola, a house near the fictional village of Toukola in 19th century Finland.

The story begins as the brothers, their parents now dead, decide to try and become proper people and take responsibility of their lives to their own hands. They face difficulties in the society, and when finally fed up, they build a new home in Impivaara, in the middle of the wilderness, to live in isolation. During the ten years there, however, the brothers find that peaceful and sustainable life still evades them. Eventually they try to fix their ways again with renewed motivation. Through hard work they repair their social standing and reputation and learn to read. Six of the seven get married and some achieve respectable public positions, and all proceed to lead mostly stable, peaceful lives.

The main characters, the seven brothers, have individual traits which can be described by the following tropes:

The work is regarded as the first novel in Finnish language, and it paved way for Finnish literature and realistic portrayal of Finnish people. As an important piece of national identity, the novel is still required school reading in Finnish secondary level education. It is now a public domain work, and various translations are currently available here