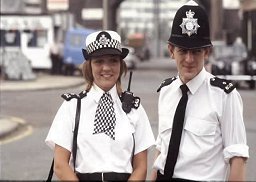 WPC Ackland and PC Carver, out on their beat.
"Sierra One from Sierra Oscar"...
Advertisement:

Britain's longest running police drama (1983 pilot called "Woodentop", then a regular series which ran from 1984 until 2010), The Bill told the story of A-Relief, one of the regular shifts in the divisional police station of Sun Hill, located in the fictional borough of Canley, East London. The series followed both uniform and plain clothes officers — though the storylines were usually skewed more towards the uniform branch — as they investigated crimes around "the manor". These crimes could be anything from high-end drug deals and gun running, right down to petty shoplifting, or relatively minor domestic squabbles between neighbours.

Originally a Police Procedural whose strict aim was to show the dull minutiae of policing, its modus operandi was not unlike that of Hill Street Blues. The use of long single camera takes, shooting the series on raw videotape rather than glossy film, and the ubiquitous use of SteadiCam gave viewers a genuine insight into what it must be like to work inside a real police station. The series became widely seen as a Crime Time Soap as the years went on, however, especially after Paul Marquess took over as Executive Producer in 2002. Marquess left the series in 2005, after which the show moved considerably back towards being a Police Procedural.

It began as a series of twelve Dramatic Hour Long teleplays in the literal sense of the word - the original pilot episode was written as a one-off televised "play for today", and there was no immediate intention of creating a series out of it. It switched to half hour long episodes in 1988 following network pressure, and it was in this format that it became widely known. However, in 1998 it changed back to hour long episodes again, whereafter it reformatted itself to become a Television Serial. Its this kind of flexibility to change and adapt with the times that had been largely attributed to its long term success. From 1988 to 2009 it ran throughout the year with approximately 90 episodes per annum (mostly two per week, but other major TV events, i.e. football, Britain's Got Talent or award shows meant that many weeks had just one), a rate of production matched in the UK only by the major soaps. This might be a large reason why it eventually came to be regarded as a soap opera, even before the more soap orientated plotlines started to come into effect later in its life.

For most of its life the show went out at 8pm, before the Watershed - which had affected specific on-screen content. However, in 2009 it was moved to a once-weekly 9pm slot, which meant a cut in episode numbers per year to about 50, and an increase in the amount of violence it could show on-screen. It also ditched the classic Theme Tune, added a "film effect" filter over the action (as part of a move to broadcast it in high definition for the first time), and acquired regular background incidental music, although Narmish examples had occasionally appeared in some past episodes. The overall effect was described by some as making things feel a little too CSI-like.

The series had been suffering a gradual decline in its viewing figures (especially after the time-slot change), and its long-term future was seen as uncertain, especially after it was dropped from terrestrial TV in Scotland as part of a broader problem with STV, the Scottish version of ITV. After the 2009 Retool failed to turn things around, its cancellation was announced on 26 March 2010, and the show ended in August of that year. In the same year, The BBC's equivalent Long Runner, the sitcom Last of the Summer Wine (actually a decade older than The Bill) was also announced to be ending, bringing the end of an era of British television to many (and, if you count in the end of the American Long Runner Law & Order, this gets global).

In April 2021 it was reported that a Reboot under the name Sun Hill (for licensing reasons) was in development, but it has not yet been picked up by any network.

This show is notable for:

Frequent tropes seen in The Bill include:

Tropes that The Bill averts: