Series / Birds of a Feather 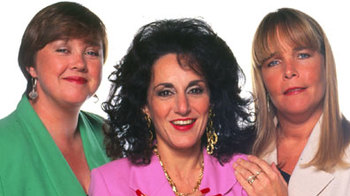 A Brit Com starring Real Life best friends Linda Robson and Pauline Quirke as sisters with Lesley Joseph as their flamboyant man-eater of a friend/neighbour.

Tracey Stubbs (Robson) is Happily Married to successful builder Darryl Stubbs (Alun Lewis, then Douglas McFerran) and has a big house, plenty of money and a son, Garth (Simon Nash, then Matthew Savage), at boarding school. Sharon Theodopolopodous (Quirke) is unhappily married to the lazy Chris (David Cardy, then Peter Polycarpou) and has a cheap council flat and a job in a supermarket. However, Darryl's business isn't as successful as he makes out and he and Chris are arrested for armed robbery and sentenced to twelve years in prison. Tracey feels unable to cope on her own so Sharon, partly to comfort her and partly to get away from her own miserable life, moves in with her. The two spend their days adjusting to life without husbands, trying to earn money and taking the mick out of their snobby, over-sexed neighbour, Dorien Green (Joseph), who is forever having affairs behind the back of her accountant husband, Marcus (Nickolas Grace).

The original series aired on The BBC from 1989 to 1998. A new series started on ITV in 2014, 16 years after the "final" episode. It starts off with Tracey still in her Big Fancy House with only her youngest son, Travis (Charlie Quirke), for company, Sharon back in her council flat and Dorien writing novels under the name "Foxy Cohen", until events conspire to bring the Birds back together, alongside Garth (now Matt Willis, then Samuel James) who now has a wife, Marcie (Camilla Beeput), and stepdaughter, Poppy (Bethany Attrup). The revival lasted for three series (2014-2016) followed by two Christmas specials, one in 2017 and a further one in 2020 (without Quirke, who'd taken a hiatus from acting to concentrate on her performing arts academy). The series was permanently cancelled after the 2020 special.

Tropes of a Feather:

Sharon and Tracey are moving so they look around for a new house, leading to a montage.

Sharon and Tracey are moving so they look around for a new house, leading to a montage.