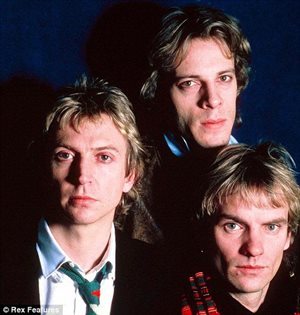 The classic line-up of The Police. L - R: Andy Summers, Stewart Copeland and Sting.
"Walked out this morning, don't believe what I saw.
A hundred billion bottles washed up on the shore.
Seems I'm not alone at being alone.
A hundred billion castaways, looking for a home."
—"Message in a Bottle"
Advertisement:

The Police were an English-American rock/New Wave Music/Post-Punk/"white reggae" trio formed in 1977 by bassist and lead vocalist Sting, drummer Stewart Copeland and guitarist Henry Padovani. Padovani was soon replaced by former Eric Burdon and the Animals guitarist Andy Summers. Reportedly, the band was named after something they knew would appear every single day in all newspapers. And what better than "police" to fit this?

The peak of their popularity came in the late 1970s and early 1980s, during which they released five studio albums and assorted singles. However, the members' clashing personalities and consequent frequent infighting led to the band breaking up in March 1984; they re-united briefly in 1986 to re-record their 1980 single "Don't Stand So Close to Me", but broke up again shortly afterward because of a lengthy argument Sting and Copeland had over which drum machine to use (Copeland had broken his collarbone earlier in a horse riding accident and couldn't play drums for a while, which also meant the band couldn't jam out any residual stress). At the time, Sting had no intention of rejoining them. They just kept ending up performing together again — at Sting's wedding, while being introduced into the Rock and Roll Hall of Fame in 2003 — and opening the 49th annual Grammy Awards, where they announced their return. Their reunion tour, which made them the world's highest earning musicians at the time, ended in August 2008.

With album sales topping 50 million and a string of hit singles including "Roxanne", "Message in a Bottle", "Don't Stand So Close to Me", "Every Little Thing She Does is Magic", and "Every Breath You Take", the Police remain one of the most iconic acts of their era.

Every trope you take: