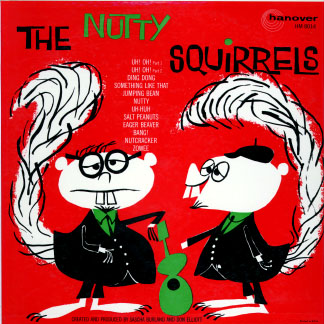 The cover of their first album, The Nutty Squirrels, released by Hanover.
Advertisement:

The initial success of Alvin and the Chipmunks with "The Chipmunk Song (Christmas Don't Be Late)" in late 1958 led to several imitators trying to replicate the success of the helium-voiced trio, the most notable of which being The Nutty Squirrels.

This squirrel duo was the brainchild of jazz musicians Don Elliott and Alexander "Sascha" Burland. Amused by the Chipmunks concept, they decided to record a jazz scat album under the guise of a hip group of squirrels, recording their voices at 16 RPM and playing them back at 33 RPM just like Ross Bagdasarian did for his Chipmunks. Backing their altered vocals were some of the best New York session musicians of the late 1950's, including Cannonball Adderley on sax, Bobby Jaspar on flute and Sam Most on clarinet.

Hanover Records, a label owned in part by Steve Allen and producer Bob Thiele, picked up the creation and issued a single in October 1959 featuring "Uh! Oh! (Part 1)" and "Uh! Oh! (Part 2)". Both sides made the Billboard "Hot 100" chart, with Part 1 reaching #45 and Part 2 reaching #19 (and #9 on the R&B Chart). The album itself, titled simply The Nutty Squirrels, was released shorty thereafter; a follow-up single and an EP featuring other songs from the album were also issued.

Meanwhile, an animated cartoon series featuring the Chipmunks was in the planning stages, but development was being delayed due to producer Format Films having trouble with the character designs. This delay allowed the Squirrels to beat them to television by a year, with 150 five-minute cartoons produced by Transfilm-Wylde and syndicated by Flamingo Telefilm Sales ready by September 1960 (The Alvin Show, in comparison, premiered on October 4, 1961).

Flamingo Telefilm Sales had imported a lot of European and Asian cartoons that they recut to five minutes in length and dubbed into English with "kid friendly" voices (and added narration onto cartoons that were mostly pantomime), then sold in a package to TV stations. Instead of going through the trouble of animating a full cartoon, Transfilm-Wylde merely created animated bookends featuring the Nutty Squirrels (done in a streamlined UPA-like style) and slapped them onto the preexisting edited foreign cartoons from Flamingo's catalog.

Despite beating the Chipmunks by a year, The Nutty Squirrels Present cartoons were a commercial flop. While there was initial interest from major TV stations such as WGN-TV in Chicago (where they ran six days a week in a 9:00-9:25 PM block), some smaller stations were hesitant to pick them up due to the "radical" jazz content and others simply dumped them alongside their packages of Terrytoons, Walter Lantz and other old theatrical cartoons. The cartoons soon faded from view, although they have been spotted on the air as late as 1975 (on WSBK-TV in Boston).

On the recording side, Elliott and Burland released a few more discs: a single ("Please Don't Take Our Tree for Christmas" / "Nutty Noël") in 1960 and an album (Bird Watching) in 1961 for Columbia Records, a single ("Hello Again" / "Blusette") for RCA Victor in 1964 and an album (The Nutty Squirrels Sing A Hard Day's Night and Other Smashes) for MGM Records, also in 1964. Besides the Nutty Squirrels, Sascha Burland is also known as the composer of "Sounds", the theme used by What's My Line? from 1957 to 1967, and "No Matter What Shape (Your Stomach's In)", an Alka-Seltzer TV commercial jingle which became a hit via a cover by the T-Bones in 1965.

The Nutty Squirrels have enjoyed a certain amount of renewed interest due to occasional airplay on the Dr. Demento syndicated radio show and the inclusion of some of their songs in movie soundtracks, such as "Salt Peanuts" in The Iron Giant and "Uh! Oh! (Part 1)" in Pecker.