Music / Ghost in the Machine 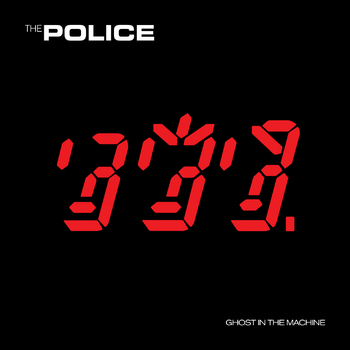 The time that's best is when surroundings fade away
The presence of another world comes close to me
I resolve to call her up a thousand times a day
And ask her if she'll marry me in some old fashioned way
But my silent fears have gripped me
Long before I reach the phone
Long before my tongue has tripped me
Must I always be alone?
"Every Little Thing She Does is Magic"
Advertisement:

Ghost in the Machine is the fourth studio album recorded by English-American Post-Punk/New Wave Music group The Police. It was released through A&M Records on 2 October 1981.

Following the rushed production of and Creator Backlash towards Zenyattà Mondatta, the band decided to approach their next record much more loosely, recording at AIR Studios in Montserrat and Le Studio (later renamed Studio Morin Heights) in Quebec specifically because of their distance from A&M Records' headquarters in California (thus locking executives out of the sessions in a pre-internet age) and expanding recording sessions to six weeks. Additionally, the band ended their working relationship with longtime producer Nigel Gray in favor of Peter Gabriel and Phil Collins collaborator Hugh Padgham, who had the band record their parts in separate rooms of the studio to reduce infighting among the members; Padgham would later repeat this technique for the band's next (and final) album.

Sound-wise, the album continues its predecessor's shift away from the band's signature reggae fusion in favor of taking influence from the rising Synth-Pop movement: synthesizers become an even more dominant element of the band's sound here than on Zenyattà Mondatta, with a combination of both keyboard and guitar synths being used on a considerable number of tracks. Additionally, Sting would incorporate horn parts onto the album, hinting at the jazz fusion direction of both Synchronicity and his own solo material. Andy Summers and Stewart Copeland weren't as enthusiastic about the change in sound as Sting was though, with Summers stating in an interview that "the fantastic raw-trio feel— all the really creative and dynamic stuff— was being lost. We were ending up backing a singer doing his pop songs." Indeed, this perception of Sting as being in full I Am the Band mode would inform the more turbulent production of Synchronicity, the band's hiatus after that album, and their eventual breakup in 1986 following further Creative Differences over the re-recording of "Don't Stand So Close to Me" for Every Breath You Take: The Singles.

Though the stylistic shift was a mixed blessing at best for the band, the resulting album was another commercial success for the band, topping the charts in the UK, Australia, Canada, and the Netherlands, and peaking at No. 2 on the Billboard 200. The album would go on to be the fifth-best-selling of the year in both the UK and the Netherlands, as well as the tenth-best-selling of 1982 in the US, where it would be certified triple-platinum. It would also go platinum in the UK, Canada, and New Zealand, as well as gold in France and Germany.

Ghost in the Machine was supported by four singles: "Invisible Sun", "Every Little Thing She Does Is Magic", "Spirits in the Material World", and "Secret Journey".

With tropes, they try to jail ya: