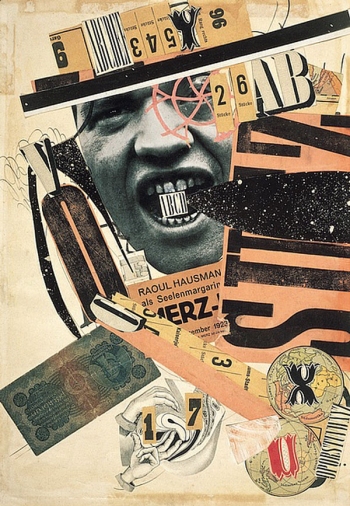 You don't deserve to have Dada described here. Instead, you will get a treatise on the nature of sock lint.

Why, you ask? Sock lint has inherently merfunculent properties that highly illustrate the exact nature of this world. There's a reason it ends up in our belly buttons, after all.

What, you say? It doesn't end up in our belly buttons, but rather shirt lint does? Shirley, you jest. And yes, you are now called Shirley. Perhaps you fail to understand the teleportational properties of sock lint — The Tick did at first, until it was later illustrated to him...

Okay, that was rather pointless, and may have even served to tick people off. That's kinda the point.

Dada itself started in the middle of World War I. The belief of its practitioners was that "the war to end all wars" was such a brutal, devastating and ultimately meaningless conflictnote not that the world didn't have its fair share of pointless devastating wars before (looking at you, Thirty Years' War), but WWI was on a much greater scale of devastation and pointlessness than most of the previous examples that such an ugly world didn't deserve art. So, in response, the practitioners of Dada gave the world anti-art.

For some time, its practitioners managed to shock the living daylights out of the world, with installations like Tristan Tzara's rendition of fellow Dadaist Hugo Ball's poem "Gadji beri bimba" (made of complete nonsense words)note This poem was later set to music by Talking Heads, as "I Zimbra

Dada eventually died out as a major movement for a few reasons. First and foremost, like Grunge during The '90s or Punk Rock in the late '70s, people started to like it — completely the opposite effect that Dada was shooting for. For another, its inherently nihilistic outlook wore on some of its practitioners, and they went in different artistic directions (most famously, into Surrealism, which was often just as confusing to people but with more point). Finally, as bad as World War I ended up, it got worse. If anything, one could look at some of the worst parts of World War II and see the end result of Dada — utter brutality and disgust for a world that doesn't deserve art. (Or in layman's terms, Dada caused the Holocaust. How's that for shock value?)

Dada still has a small but thriving following to this day — anything indulging in Surreal or Vulgar Humor and Stylistic Suck will certainly take at least a quick look at it for inspiration, and more than one Black Comedy has been noted as falling squarely into the Dada tradition. Ubu Roi (King Ubu), a Dada take on Macbeth, Hamlet and King Lear (technically, predating Dada proper by 2 decades) is still produced today. The influence of Dada can also be seen in Youtube Poop which was at first done simply to confuse audiences looking for other works and has been described as Neo-Dada, and Postmodernism has at least part of its influence from Dada and what would later become of it. The meme culture of the late 2010s also owes a lot to Dada, having emerged out of similar socioeconomic circumstances and a war that was perceived as pointless.

Obviously, the Trope Namer for Dada Horror, Dada Comics (which are really much closer to "surrealist comics"), and Dada Ad (which sometimes do inadvertently wander into the Dada tradition).

Compare and contrast Postmodernism, which sprung out of the world's reaction to WWII instead.

And no, this is neither a baby's first word nor the Ultraman aliennote Although the race's design is inspired by the movement, and can even be considered an example of it, becoming an icon of Dadaism in Japan. Nor is this article about the Alternative Rock band named dada who performed the song "Dizz Knee Land" and whose music isn't even remotely dadaist. Nor the Electro House duo Dada Life (though their aesthetic does tend to veer towards the weird). Nor is it about Indian cricketer Sourav Ganguly who is nicknamed "Dada" meaning Boss or Grandpa.

This movement provided examples of: