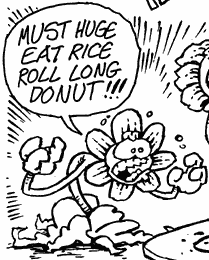 This makes even less sense in context.

"MY NAME IS POKEY THE PENGUIN I LOVE CHESS!! IT IS LIKE BALLET ONLY WITH MORE EXPLOSIONS!"
— Pokey, Pokey the Penguin
Advertisement:

Geeks have a weird sense of humor. Geeks also read a lot of webcomics. As a result, many webcomics tend to have a bent towards surreal, non sequitur humor. Dada Comics take this to the extreme, being composed of nothing but surreal, non sequitur humor. They may be gag-a-day comics, or cover story arcs that make little or no sense. They may also be (intentionally) badly drawn and scripted — the biggest difference between this and unintentional bad drawings and scripts is the difference between imitations of timecube.com and The Eye of Argon.

Since they're not meant to be taken seriously, Dada Comics are almost never subject to Cerebus Syndrome — though there are at least two exceptions.