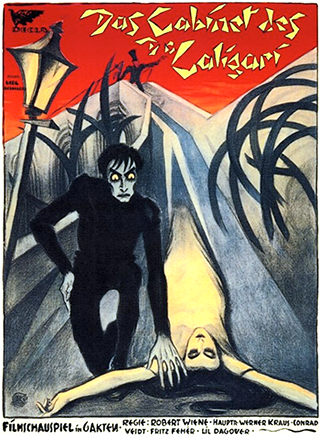 German Expressionism was an artistic movement that began in Germany during the first years of the 20th century and held sway during its first three decades. The term applies to several artistic disciplines, including visual art, film, music, literature, architecture, and dance. Despite its name, the genre found adherents worldwide.

In the film world, the movement culminated in the 1920s with Expressionist cinema. It proved extremely influential, helping establish the idea that cinema could be an art form and not just entertainment. These films were a major contributor to the Horror genre and important precursors of Film Noir. Major practitioners included Fritz Lang, F. W. Murnau, and Robert Wiene.

The term also is applied to some Classical Music examples from the first few decades of the 20th century, especially by members of the Second Viennese School (Arnold Schoenberg, Alban Berg, and Anton Webern). Its culmination was found in the atonal works (serial and not) by these three composers. Stylistic fingerprints include a non-triadic idiom that avoids Common Practice Period functional harmony but often retains classical structure, as well as settings of Symbolist or Surrealist poetry by writers such as Stefan George and Albert Giraud. It influenced a significant amount of the non-triadic music that has followed since.

Expressionism tends to be characterized by showing the subconscious feelings of the characters and making them the surface of the work. The audience will be shown not what is strictly, naturally real (in fact, painters intentionally avoided it), but an abstract view of what the characters feel is real. Artists preferred to use large shapes and thick outlines rather than natural shading and colors. Shapes are stretched and twisted, and the subjects are portrayed in grim, tense poses. Such art is generally portrayed as fairly dark.

Translating this art style into movies usually involved surreal set designs, dialog that dispenses with naturalism to let the characters' inner motivations and thoughts be stated with brutal honesty, and stark lighting effects. A strong, nightmarish atmosphere tends to prevail. In German cinema of the 1920s, Expressionism was actually part of the director's attempts to emphasize the subjective perspective and try and portray psychological complexity within the limits of the silent film medium. Fritz Lang noted that the It Was His Sled aspect of The Cabinet of Dr. Caligari stemmed from their attempts to ground the entire film in a believable reality. As camera techniques improved and actors developed a way of acting for silent films, directors gradually pushed to greater realism in the 1920s. Even Nosferatu was largely shot on real locations, as a deliberate contrast to the Looks Like Orlok vampire who is even more creepy in that believable landscape.

Much modern art, and modern film in particular, is heavily influenced by German Expressionism: films like Edward Scissorhands, Dark City, and Batman Returns are extremely expressionist, and almost any movie that have a nightmarish city, a machine-like bureaucratic government, or an evil AI owes a little to German Expressionism.

Notable tropes made by, codified by or named after German Expressionism in film include:

Other tropes frequently associated with the genre: