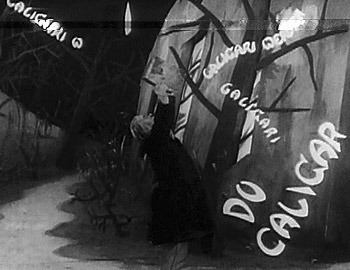 Apparently, you have to become Caligari.
Advertisement:

A montage that brings you inside the mind of a character going mad.

Music is heard, which may be quiet at first, but steadily increasing in volume and cacophony. Characters from several scenes may be superimposed, with some of them repeating fragments of their lines over and over again, in the manner of a Madness Mantra.

This may be the time when the character goes Ax-Crazy and murders someone. Alternately, he may be screaming at the top of his voice, trying to drown out the chaos assaulting his imagination.

Compare Black Bug Room. Compare also Through the Eyes of Madness, which takes a mad character's POV for a sustained amount of time.