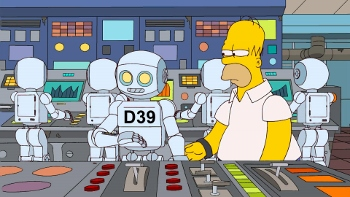 They kept Homer because no machine can be as entertaining when it fails.
Reasons for anti-robot rioting certainly existed. Men who found themselves faced with the prospect of the desperate minimum involved in declassification, after half a lifetime of effort, could not decide cold-bloodedly that individual robots were not to blame. Individual robots could at least be struck at.
One could not strike at something called “governmental policy” or at a slogan like “Higher production with robot labor."
— The Caves of Steel
Advertisement:

As technology advances, robots become more complex and more capable of doing a greater variety of things - at a faster, better and more consistent rate than if a human were to perform the same task. When robots have achieved a level of capability that business owners buy them and replace their human employees, you have a Job-Stealing Robot.

The Job-Stealing Robot does not need to necessarily be a robot; a piece of software or other type of machine may do the trick. The point is that artificial constructs are being built and are replacing the old workforce.

Definitely Truth in Television: advances in computing, artificial intelligence, robotics have led to a lot of manual, analytical and office jobs being replaced or consolidated. Unless humans begin to augment themselves to match these machines' capabilities, there's little chance that man will dominate machine in an increasing amount of fields of competence.

While technically this would allow humans to free themselves from monotone tedious labor as productivity increases, making people displaced by robots benefit from robot-made goods would require a major overhaul of the economy, necessitating political and social solutions, not merely technological. Many socio-political theorists and futurists do believe that, at some point before the middle of this century if technological progress is any indication, robots will indeed replace the vast majority of human jobs, effectively leading to a "Post-Capitalist" social order. While no one is quite sure of what exactly will that entail, this is bound to result in a net increase of humanity's prosperity - the question is whether everyone will be able to benefit from it or humanity would be divided into robot owners and everyone else. In the worst case scenario, reserved for Dystopias, elites refuse to share the newfound prosperity and solve unemployment by killing the poor now that they are unnecessary.

A plot that involves this trope will most likely also involve someone hating the robot for the fact that they steal people's jobs - especially theirs.

An application of Technology Marches On and subtrope of Man Versus Machine. Overlaps with Ludd Was Right. When someone fights against the Job-Stealing Robot, particularly when using questionable means, you're looking at an Evil Luddite. More often that not, due to the fact that humans tend to triumph or compromise with machines by story's end. Compare Undead Laborers for the fantasy counterpart. Contrast We Will Use Manual Labor in the Future. Compare and Contrast Rotten Robotic Replacement, which is about a single character or group being replaced, with disastrous results.

a rare example of Economy-Stealing Robots due to the highly-innovative nature of Machines and not being held down by biological necessities like the Humans, 01s' Economy inadvertently caused a global stock market crash for the Human Nations.

a rare example of Economy-Stealing Robots due to the highly-innovative nature of Machines and not being held down by biological necessities like the Humans, 01s' Economy inadvertently caused a global stock market crash for the Human Nations.