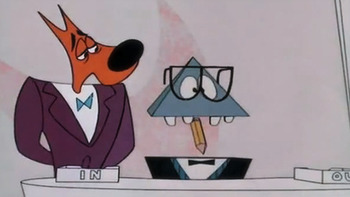 Technological Threat is a 1988 Oscar-nominated short by Bill Kroyer (FernGully: The Last Rainforest) and Brian Jennings.

It's about Tex Avery-esque wolves being replaced by CGI robot "dweebs" with one wolf fighting back against one of the robots.