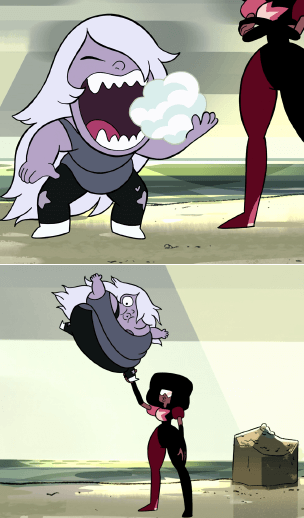 They advertised it as "lighter than air", so you are what you eat, I guess...
"Good thing I found a magic balloon!"
— Luigi, Super Mario World
Advertisement:

A character inhales too much helium or some other gas, and their whole body inflates like a balloon. Usually their clothes stretch with them. This is often inflicted on the character as an Amusing Injury, but some characters will do it to themselves deliberately. Because All Balloons Have Helium, inflated characters are liable to float in the air or blow away in the wind, even if they were inflated with normal air. It often ends with the character deflating just like an untied party balloon, flying through the air and sputtering as the gas rushes out of them. The inflating body gag can happen if a character blows his thumb.

May also be done with water or other liquids, in which case you can expect a lot less floating and a lot more wobbling.

Naturally, a trope Played for Laughs because of its sheer impossibility in Real Life (unless you happen to be a pufferfish).

Compare Balloon Belly (when a character gets an extreme potbelly), Breast Expansion (because Buxom Is Better) and Temporary Bulk Change (when a character gets fat and then inexplicably slims back down between scenes) or Attack of the 50-Foot Whatever (grow in size but not inflate). Its logical conclusion is usually "Pop!" Goes the Human. Related to Be the Ball, so overlap occurs. Contrast with Squashed Flat. As a form of Toon Physics, this trope tends to run on Rule of Funny and Willing Suspension of Disbelief.

Online, this trope is also known for being a common Fetish... but let's not get into that here.

Scrat Fails To Plug A Leak

In the opening scene of the movie Ice Age: The Meltdown, Scrat inflates like a water balloon when he's climbing an ice wall and he tries to plug a leak with his face.

Scrat Fails To Plug A Leak

In the opening scene of the movie Ice Age: The Meltdown, Scrat inflates like a water balloon when he's climbing an ice wall and he tries to plug a leak with his face.