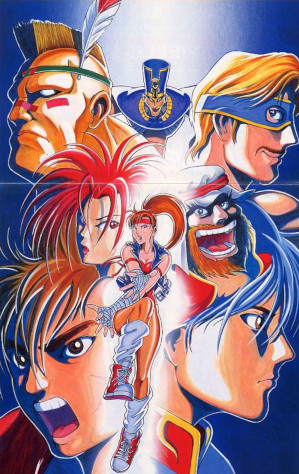 "Kurenai Sandan Geri!"
Breakers is a 1996 Fighting Game developed by Visco for the Neo Geo platform. It's yet another game influnced by the spectacular success of Capcom's Street Fighter II, though its gameplay is more close to SNK's The King of Fighters. The game was originally annouced in 1993 under the name Crystal Legacy, before it went through a total overhaul to become the game we got. Visco later published an Updated Re-release of the game titled Breakers Revenge in 1998, which added a new character to the roster, made the final boss playable via a secret code, and intoduced some adjustments towards the gameplay balance.
Advertisement:

The story is not too dissimilar from other tournament-style fighting games. Somewhere in Hong Kong, a mysterious competition known as FIST (The Fighting Instinct Tournament) is held every year, inviting martial artists around the globe to determine the strongest in the world. However, it's said that the champion gets a chance to fight the organizer of the tournament, only to be never seen again. Unsurprisingly, this turns out to be a trap set by an evil spirit named Bai-Hu, the sponsor of the competition who wants to possess the body of a strong martial artist to raise his dark power. Not knowning what's waiting ahead, another group of fighters arrive at the tournament, and the battle is about to begin once again...

Although Breakers ultimately failed to make a wake against contemporary games, it still maintains popularity in the internet competitive scene and is generally thought as one of the better fighting games from the era. Its cult favorite status eventually led to 2017's re-release for Sega Dreamcast (being based on the original version rather than the Revenge update). It also has a big following in some casual Japanese tournaments such as Mikado Arcade.

Breakers and Breakers Revenge will be available on current gen systems (PC/Console) coming soon in 2022 as the Breakers Collection.

This game has nothing to do with Dawn of the Breakers, known in Japan as Breakers: Dawn of Heroes, nor does it have any relation to the Synapse Software electronic novel "Breakers".