WARNING: Those with photosensitive epilepsy should watch this episode with caution. 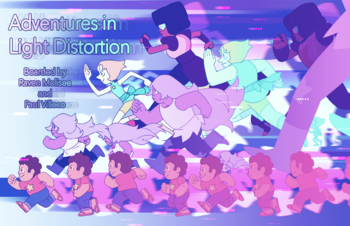 Steven and Garnet warp into the Beach House to be greeted by Pearl and Amethyst. Steven calls for action to catch up to Blue Diamond who took Greg from Earth. After a short discussion, they conclude Blue Diamond and Greg's destination to be Pink Diamond's Zoo, an insidious establishment where Pink Diamond brought the humans she had captured as trophies of her conquest. The Crystal Gems set off in the Roaming Eye after a safety inspection by Peridot, and Steven is eager to go to the point where he leaves Connie, Lapis, and Peridot with protecting Beach City in their absence. During the flight through space, the Crystal Gems encounter the asteroid belt and navigate around it. Afterward, they encounter the Ruby squad members Doc, Navy, and Army on their windscreen before flying off back into space. They plan on rescuing them on their way back.

Steven asks Pearl how long it will take to reach the Zoo. Pearl reads the panel and determines they will arrive in seventy human years. Steven is concerned as Greg is not healthy enough to live that long. Garnet and Amethyst recall Peridot's mention of the gravity engine and its ability to bend reality. Pearl claims it would just alter the definition of speed by manipulating space-time and questions how it would affect organic matter. Steven takes the chance of turning into a pancake and activates the gravity engine.

Amethyst, Garnet, and Pearl are shortened to the height of Rubies; Pearl appears irritatedSteven wakes up from a blackout to see the Gems shortened. Pearl, trying to understand what is happening, explains that they are in a situation where there is no effect of normal laws of physics. Steven notices that they are shortened thanks to the ship being calibrated for Rubies. Then he attempts to change the settings to return the Gems to normal but instead causes them to morph to the sizes of different Gem types. Steven tries to adjust it manually but morphs the Gems into chaotic shapes lacking integrity. Steven eventually causes the system to return an error. He presses the 'X' on the screen which deactivates the calibration and causes the ship to fly faster.

Steven, pinned back to the pilot seat due to the immense speed, sees the screen indicate their destination is being approached at an alarming speed, threatening to cause a collision. In an effort to stop the ship, Steven pushes himself to touch the screen, initially failing to do so. Then he mourns the situation, claiming he should have never gone to Korea and let Greg be abducted by Blue Diamond. With the acquired determination from his distress, he finally manages to slow the ship down.

As everything returns to normal in the ship, the Crystal Gems rejoice, revealing that the velocity of the ship after the calibration had turned down was larger than the speed of light, tampering with Gems' light forms. It is then seen in the distance their destination has been reached.