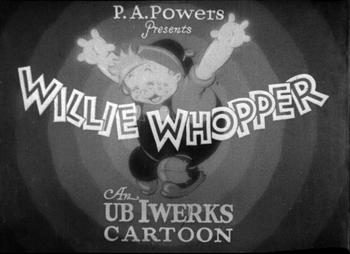 "Say, did I ever tell ya this one?"
Advertisement:

Willie Whopper was a short lived series of cartoons produced and directed by Ub Iwerks, running for 13 shorts from 1933 to 1934. The series was made as a replacement for Iwerks' previous series Flip the Frog, alongside his Comi Color Cartoons shorts.

The shorts all follow a simple formula—Willie, a young, eager boy, tells his friends (or sometimes, the audience) about some outlandish adventure he went on recently, which serves as the story in question for the short—naturally, the stories turn out to be nothing but exaggerated lies (or, "whoppers", hence his name). Like other Iwerks cartoons, the shorts are rife with cartoony animation, as well as a stylized rubberhose art style, courtesy of designers such as Grim Natwick and Berny Wolf. Carl Stalling would also provide pleasant, if pedestrian scores for the shorts. The series was usually produced in black and white, although there were three entries which were filmed in color, and Iwerks still had his cels colored in spite of the black & white footage, to see if he could get different shades of gray in the photographing.

While the series was fairly well received when it was released, it came to an abrupt end when MGM dropped distribution of Ub's cartoons, instead choosing to distribute Harman and Ising's Happy Harmonies shorts. As such, Ub abandoned the character and shifted focus towards his ill-fated Comi Color Cartoons, with Willie becoming yet another one of many forgotten stars of the Golden Age of Animation.

Fortunately, some of his cartoons have fallen into the Public Domain, and as such are easy to find, giving his films a chance to see the light of day again. In late 2015, Thunderbean animation released a restored Blu-ray & DVD set of all of his cartoons.