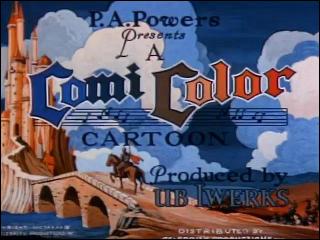 Comi Color Cartoons was a short lived series of cartoons, produced by former Disney animator Ub Iwerks for Celebrity Pictures from November 1933 to September 1936. The series was produced by Iwerks to compete with Walt Disney's then-smash hit Silly Symphonies series, and to make up for the losses of Flip the Frog and Willie Whopper.

While it would be easy to write off these cartoons as low budget knockoffs of Disney's lavish cartoons, closer examination of the shorts will reveal that they do have several things going for them. For starters, while Disney made his Symphonies shorts increasingly sentimental and idealistic, Ub kept a more gritty, down to earth approach to his fairy tales, as evident in shorts like "Balloon Land", "Aladdin and his Wonderful Lamp" and "Dick Whittington's Cat". Ub also outright ignored Disney's push for more realistic animation, instead opting for a more stylized version of the early 30's rubberhose style that is indisputably influenced by the early works of Fleischer Studios—supported by that Iwerks had at least four ex-Fleischer staffers on board: Grim Natwick (who often supervised, designed and animated for the shorts in Iwerks' steed), Berny Wolf, Shamus Culhane and Al Eugster.

Although the characters were typical one-dimensional cyphers, the stories were handled in a workmanlike fashion, and the animation in some of the shorts is fairly well done—Balloon Land in particular is full of principles such as squash and stretch and overlapping action. And, being a Silly Symphony clone, lavish color was up front and center, with lush, sumptiously painted backgrounds in each cartoon, and the cartoons were backed up with lively scores supplied by Iwerks mainstay and future Looney Tunes composer Carl Stalling. Another standout feature of the cartoons was the occasional use of a proto-Multiplane Camera that Iwerks himself built out of parts of a junked chevrolet car, which actually precedes the completion of Disney's own Multiplane apparatus.

Despite this, the series was doomed from the beginning. Unlike with Flip and Willie, Iwerks no longer had MGM to distribute the cartoons, with his boss Pat Powers having to distribute the cartoons himself. And, as expected, Iwerks shorts simply couldn't compete with Disney's own lavish shorts. After a three year stint of 25 shorts, the series folded and Ub was forced to close up shop, prompting a return to Disney in the following years.