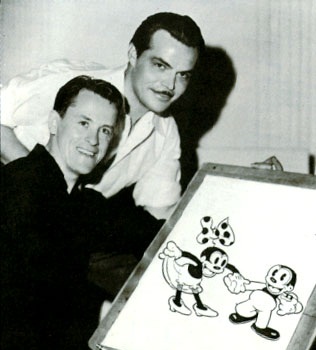 That's Hugh Harman on the left, and Rudy Ising on the right, pictured with creations Honey and Bosko, the Talk-Ink Kid.
Advertisement:

Hugh Harman and Rudolf Carl "Rudy" Ising (both were born in August 1903, Harman on August 31st, and Ising on August 7th; Harman died on November 25, 1982 and Ising died on July 18, 1992) were former Walt Disney employees, getting their start on series such as the Newman Laugh-O-Grams, the Alice Comedies and Oswald the Lucky Rabbit, helping jump-start the Warner Bros. cartoon studio in 1929, and they helped get MGM's animation department off the ground. They were also the creators of Bosko, the Talk-Ink Kid (and, more regrettably, Foxy) as well as MGM's Happy Harmonies, the Barney Bear shorts, and many oneshot shorts, including the anti-war short Peace on Earth. While barely remembered today (unless you are an animation historian, like Jerry Beck), they played a major role in shaping the events of The Golden Age of Animation.

An interview with Hugh Harman, courtesy of Micheal Barrier, can be found here

, which gives much insight into his backstory, as well as his method of filmmaking and what he learned over the years of his career.

Trope Demonstrated by the Mere Existence of These Two:

Tropes Related To Them: