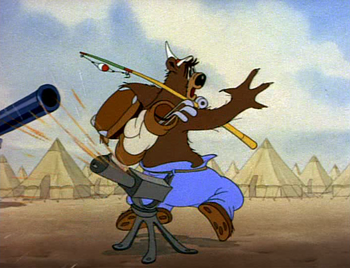 The Rookie Bear is a 1941 cartoon from MGM directed by Rudolf Ising.

It is an installment in the Barney Bear series. In this one Barney, who was basically Yogi Bear 20 years early, is hibernating in the trunk of a tree when he gets a telegram informing him of a "free vacation"—from the United States Army. He's been drafted. Barney, who shows up at boot camp with golf clubs and a tennis racket and the like, is rudely surprised to find out that he is not getting a a free vacation. He then goes through a particularly uncomfortable bootcamp ordeal.