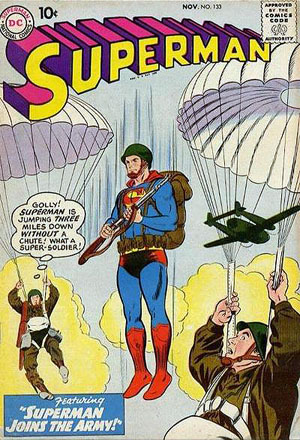 In your face, Captain America! note  Wait, why does he have a gun and helmet?
Advertisement:

Exactly What It Says on the Tin, an episode where the characters (accidentally or not) become recruits at the Military Academy, or in case of children they go to the Military School as punishment, either way Hilarity Ensues.

Expect to see lots of Peeling Potatoes, training The Spartan Way, plenty of Physical Fitness Punishment, the obligatory Drill Sergeant Nasty and maybe even battlefield action. Male characters will probably be shaven bald upon arrival (female recruits usually just have to resort to a tight ponytail or bun).