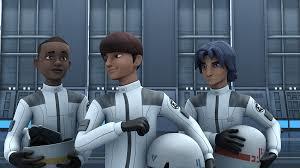 Jai: Hey, Zare… bet'cha I get my next cameo before you do.
Zare: You're on!
"Cadets, you entered this facility as children. And in a few short weeks, you will leave as soldiers. By the time you complete your training, you will be prepared to serve your Emperor. Today, we will test your strength and resolve. Are you ready to become stormtroopers?"
— Commandant Cumberlayne Aresko
Advertisement:

Kanan has sent Ezra and Chopper on a mission to infiltrate the Imperial Academy on Lothal so they can get access to data files which include the coordinates of a convoy that is in possession of some kyber crystals for the Empire. There, Ezra makes two new friends, Zare and Jai, who are among the best cadets alongside Ezra. Unfortunately, Kallus is currently stationed at the Academy, and to make matters worse Ezra overhears a conversation between Commandant Aresko and the Inquisitor: it turns out that the Empire flags cadets for potential Force-sensitivity, with any cadets weeded out like this getting a visit from the Inquisitor to confirm it. And Ezra and Jai have been singled out for a visit...